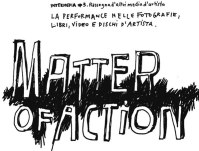 Matter of Action is the third appointment of the INTERMEDIA cycle, an exhibition of alternative artist’s media – curated by Giorgio Maffei, Sara Serighelli, Fabio Carboni and Samuele Menin.
By nature, performance, happening, body art, action poetry are artistic actions aimed at lasting only for the short moment of their ritual fulfillment. This exhibition tries to stop the time focusing on the sequence of actions through those media able to give substance and duration to the performing event – photographs, records, videos and books. Through a set up that can appear disturbing, the exhibition wants to suggest a sharing experience of the contents based on the visitors’ perception.

Photographs, books, videos and the artist’s records hold the memories, preserving tracks and, at the same time, transcribing – with different tools – images, words and meanings of a way of making Art that has deeply affected the historical development of the second half of the 20th century.
All along the exhibition, art works from the 60s and 70s are gathered through necessary historical photographs to hint at the first performing actions of the Avant-garde and of the artists who, at the end of the ‘50s, turned their work toward the overtaking of the objectual form of the artifact. Duchamp, Man Ray, Dalí, then Manzoni with Klein and Fontana undertook the path which find its thoroughness both in the Conceptual and in the Arte Povera anvironment, as well as in Fluxus of the following decade. Allan Kaprow’s theorizations, Abramovic and Gina Pane’s actions, Nitsch and Muehl’s expressive violence, Acconci and Oppenheim’s body discipline, Ontani e Lüthi’s trasformism, Agnetti, De Dominicis and Nauman’s rigorous intellectual action, Kounellis and Calzolari’s theatrical behaviour, the use of their own face as expressive matter in Boetti, Penone and Zorio, and moreover, up to the overtaking of the disciplinary limits with the new music of Cage, Chiari and La Monte Young, the dance with Monk and Trisha Brown or poetry with Lora Totino, Spatola and Isou.

In a part of the exhibition Matter of Action, Italian artists have been invited to present in Milan a performance already made in their past, through two different ways: live performances with Italo Zuffi, Simone Berti, Giovanni Morbin, Christian Frosi & Diego Perrone, Dafne Boggeri, Nicola Ruben Montini, Michele Bazzana, Igor Muroni, as well as through some videos, with documents by Cesare Pietroiusti, Elisabetta Benassi, Lorenzo Scotto di Luzio, Cesare Viel, Patrick Tuttofuoco, Davide Savorani, Sissi (…). This part hasn’t the historical ambition to cover everything that has been happening in Italy during the last years, but it freely dots a temporal lapse through the actions of some artists who have occasionally or constantly used the performance in their research. These appointments draw possible trajectories and paths between historical experiences from the 60s and 70s up to contemporary episodes.

Over forty years after the publication of the text “Intermedia”(February 1966) by Dick Higgins in “The Something Else Newsletter”, the curators of this exhibition have borrowed this title which best expresses the need of contemporary culture to ‘shuffle the cards,’ to break down the strict barriers between disciplines and to consider art and its ways of expression as one singular creative process. The cycle of exhibitions develop through themes and segments: the first appointment of the cycle, ‘10 – a generation of artist’s books, 1999-2009’ was held in September 2009 and the second ‘SUPERARCHITETTURA RADICALE books, posters, magazines’ in April 2010.